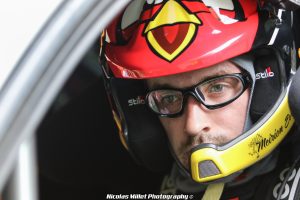 With his father, Melvyn Evans, such an accomplished and celebrated rally driver, and living in an area of west Wales where rallying and rugby complete for top billing, it was somewhat of a surprise that Meirion Evans’ first sporting love was football. It wasn’t long, however, before Meirion was bitten by the rally driving bug, as he contested his first rally in 2009, aged just 14.

Since then, Meirion has gained an enormous amount of experience, and is one of very few drivers worldwide to have competed in four top R5 cars – a Volkswagen Polo GTI R5, Škoda Fabia R5, Hyundai i20 R5 and Ford Fiesta R5; all prepared and run by the family’s Melvyn Evans Motorsport business. And he’s also one of the view drivers from outside Ireland to compete at the sharp end of one of the sport’s toughest fought and most challenging national championship – the Irish Tarmac Rally Championship.

Meirion was born, bred and still lives near the small village of Llanwrda. The house where he lives is built on land once owned by his grandfather, his father was born in the house next door, most of his relatives live either within sight or within shouting distance and Meirion has no intention of leaving either.

Meirion made his rally debut in 2009, driving a Nissan Micra on a round of the Formula 1000 Junior Rally Championship. From that moment on, his football boots were never muddied again.

The series is aimed at 14 to 17 year olds, and after three years of driving the little car around airfield and race circuit events on its door handles, Meirion ended his time in the Formula 1000 Juniors with victory on the Glyn Memorial Junior Stages before moving up into adult rallying. And it was a giant leap too, missing out several levels to go straight into the 2013 British Rally Championship Challenge.

Despite his new Ford Fiesta ST being a much faster car, Meirion took everything he’d learnt about front-wheel drive rallying on asphalt to score some very impressive results on his first forays onto gravel forest events – including a class victory on the Neath Valley Stages and fourth in class on the Trackrod, Scottish and Severn Valley rallies. 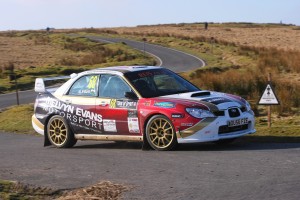 One would not expect his next season in rallying to be in Ireland in a Group N Subaru Impreza STi – a car twice as powerful as the Fiesta ST, turbocharged and four-wheel drive – but that’s what Meirion did in 2014 as his ‘in at the deep end’ career path continued. There were some fantastic results – like third in class in Wexford, Carlow and the Circuit of Munster – and there some inevitable mishaps, like going through a hedge backwards on the ALMC Rally whilst lying an impressive sixth overall! This was also the first year that Meirion was co-driven by Jonathan Jackson, and they have rallied together ever since. 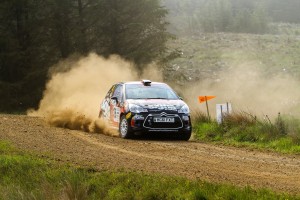 Meirion returned to front-wheel drive in 2015, driving a powerful Citroën DS3 R3T on selected British and Irish gravel and asphalt rallies. It had been the car to have in the British Rally Championship, and with the series taking a sabbatical, the plan was to learn the car for an attack on the BRC when it returned the following year. The season was full of good results, with class wins on the Cambrian, Cork 20, Tipperary Stonethrowers and Severn Valley rallies. It was a great learning exercise too, although when the BRC did return in 2016, it was for R2 spec cars and the DS3 wasn’t eligible.

Undeterred, Meirion contested a variety of events in 2016, this time mostly in mainland UK, in a Ford Fiesta R2T. Despite finishing second in class on the Severn Valley Rally, third on the Cambrian Rally and some very close Junior BRC podium near misses, by his own admission it was by far his worst season, with a slow speed roll on the Cork 20 ending a miserable year.

Meirion embarked on a full assault on the Junior British Rally Championship the following season in a Peugeot 208 R2 – his fifth different car in six seasons of competition! The first half of the year was spent regaining confidence lost the previous season – yet on both gravel and asphalt, he was proving time and again what a very capable young driver he was becoming, with second in the JBRC on the Scottish, third on the Pirelli International and fourth in Ypres.

It comes as little surprise that Meirion did the unexpected in 2018, travelling to the continent to contest rounds of the Peugeot 208 Rally Cup. The French events had much longer stages, which required a considerable amount of tyre and brake management. Driving a Peugeot 208 R2 hired from the Chazel Technologie Course team, Meirion was super quick against strong local opposition, with one of the many highlights of a big learning year being setting the fourth fastest time over one of the world’s most famous rally stages, the Col de Turini.

After three and a half years back in a front-wheel drive car, Meirion contested a number of Irish events in the second half of 2018 in an R5 car – finishing fifth overall on the Down Rally in a Ford Fiesta R5 and second and third on the Wexford and Cork 20 rallies respectively in a Hyundai i20 R5.

It was clear that Meirion was at his best in a modern R5 spec car and a full time move to much more powerful and technically superior four-wheel drive machinery was made for 2019. There are easier, less competitive

championships to bed yourself into a new car, but Meirion returned to the raging caldron that is the Irish Tarmac Rally Championship. He finished 11th overall on the Galway International Rally, seventh overall on the UAE Easter Stages Rally and 10th overall in Donegal in a Hyundai i20 R5 before swapping mid-season to a Škoda Fabia R5 and finishing fourth on the Ulster and second on the Cork 20. 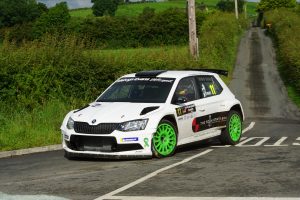 Meirion also contested the West Cork Rally for the first time in 2019. It’s a rally his father has won twice (in 2002 driving a Ford Escort WRC and in 2006 in a Subaru Impreza WRC), and whilst an early issue with the Hyundai’s fuel pump denied him any chance of victory himself, Meirion set some excellent stage times when he superallied on day two. He also led Rae Bae Ceredigion, Wales’ first closed road stage rally, before sliding the Škoda slightly wide and into retirement.

In 2020, Meirion is once again contesting the Irish Tarmac Rally Championship. And the season started well, with one of his best drives of his career coming on a characteristically wet and slippery Galway International Rally, where he finished fourth overall in a brand new Volkswagen Polo GTI R5.